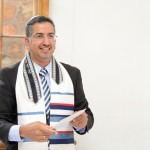 Sometimes when watching nature programs, I wonder at the majesty and the beauty of the creatures being.  And then, a moment later, after admiring the beauty of the lion, you see it pouncing and killing its prey, and this thing of beauty turns into something quite savage.  The nature programs often move seamlessly between the beauty and the beast.  We know that certain animals might be majestic and beautiful to look at, but at the same time, we know that they can be savage killers.

In this week’s Torah portion, as Moses continues his final address to the people, he implores the Israelites to follow God’s ways, making it clear to the people that their suffering in the past has come about as a result of their rejection of God and the commandments which were given to them.

There is also a sense of Moses’ own mortality with this fear of how they will fare once they enter into the promised land and he won’t be there to protect them, leaving them with Joshua and with God. One of the strong images from Moses’ song is the comparison he makes between God and an eagle. “Like an eagle who rouses his nestlings, gliding down to his young, so did God spread God’s wings and take you, bearing you along on his pinions“.

This image was first used at Sinai, as we recalled that God brought us out of Egypt “on eagles’ wings“. And it is an interesting image to use for God. The eagle, which can be dangerous and deadly, is also associated with rescue and redemption. It has the potential to be a killer, but it also has the capability to be a saviour. In this context, we are urged to relate to the eagle not as its prey, but as its child; for the eagle was known to be particularly caring and nurturing of its young.

On the banks of the Jordan Moses’ song emphasizes the fact that God has the power to save and the power to punish. There is a hope that as we enter the Promised Land, God will be like the eagle flying overhead, keeping a watch on its young, and ready to swoop down and protect them if necessary. But the eagle is also, by its nature, a bird of prey. And there is the implicit threat that this bird of salvation may become an eagle of death, swooping down to attack rather than diving down to help and protect them.

As we read this Torah portion on Shabbat right after Yom Kippur, this imagery of life hanging in the balance is very appropriate. The atonement of Yom Kippur doesn’t change our responsibility to be cautious about every step we do, every decision we make. The consequences we have to face afterwards are not banked for the next High Holy Days. They influence our relationship to the eternal continuously, every single moment, every second. It is on us whether God is the eagle that can save us or the one that can punish.