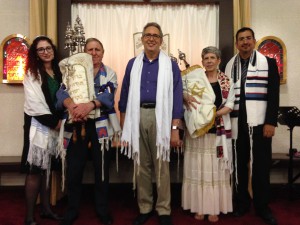 As Moses is about to climb Mount Sinai to receive the Ten Commandments, the Israelites gather at the base of the mountain, and affirm their commitment to fulfilling God’s commandments. Interestingly enough, they have not yet heard what those commandments will be! Nevertheless, they make a commitment to obey God’s word: “All that the Eternal has spoken we will do!” (Exodus 19:8).

I like to think of the Ten Commandments as Ancient Israel’s mission statement. God and Moses both knew the Children of Israel needed a document that stated the purpose of the people, and pointed them towards their destiny. It had to be a statement broad enough to encompass a variety of interpretations, yet compelling enough to be shared by everyone.

The variety of opinions concerning the Ten Commandments today testifies to the sheer power and success of this most influential document. The Ten Commandments formed the Israelite people: a disparate people with competing agendas, into a unified nation with a shared purpose.

Having a shared purpose defines community. For us at Bet David, it is our bond with the Jewish tradition and all Jews, and our understanding that all humans are equal, regardless of race, gender identity, age, disability, national origin, and sexual orientation. Our goal is to make this world a better place – step by step, and we share this with many Jews all over the world.

But reality proves that not everyone is sharing those values with us, and too often these others are fellow Jews. Last week’s Jewish Report (http://goo.gl/x69hI6) contains one of those hurtful examples in which the respect we offer to others, is rudely rejected. Vilifying progressive rabbis as “uneducated”, and not worthy of being addressed as rabbis is outrageous, because it destroys the idea of Klal Israel, one Jewish people. It uses the same methods anti-Semites use in their approach to de-legitimise Israel as an unworthy state. But as much as the anti-Semites are wrong, the author of this statement in the JR is wrong in his approach to make us second class Jews. With his hate-speech, he is leaving behind the common ground our ancestors once created by accepting the Torah.

We have reached out to the Jewish Report, and some of us have sent letters to the editor. Hopefully, this will have an impact. Whatever the outcome may be, we will continue to strive for equal rights and opportunities for all Jews regardless of their background. As progressive Jews we can be proud of what I call our mission statement, our modern interpretation of the Ten Commandments.